Brand New Attiny’s And The Problems

I write this down, for myself, and to help others not to search for hours too.
I bought a few new, ATtiny 85 and Atiny13 at Aliexpress. It was the first time, I used these brand new controllers.
So what can go wrong? EVERYTHING 🙂

First, I soldered them to the PCB-breakouts Sot8 to DIP8, so they can be used with a breadboard to play around. I connected my ISP programmer, but I could not program them, neither write a bootloader to them. 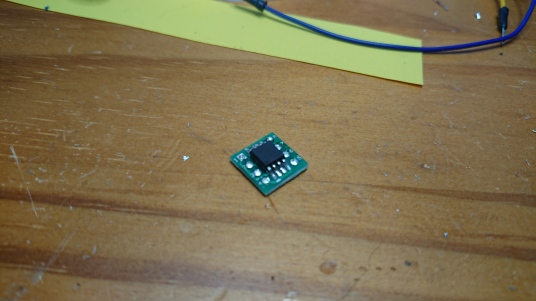 I searched for hours on the Internet, but nothing worked. I started to understand the log with the error message and the main problem is, that the ATtiny’s have no ID. The Arduino IDE could not write on them, because it could not identify the controllers. I always thought, that the Attiny had a base configuration, but that seems not to be true, or they had been already programmed.

After reading the datasheets, I found out what to do, and I googled for fuse reset’er. I found a few how to’s, and an easy one to build.

All you need is an Arduino, a few parts, and 12V. I used this schematic and modified it for my use. It’s written in german, but I just needed the wiring diagram and the software.

R1 to R4, you can leave away. No need for them. For R5 you can use something between 5K and 10K. R6 will be 1K. I added a step up converter for the 12V, so I can use the Arduino over USB without an external power supply. I also added a Led to show me when the 12V is used.

The program to write on the Arduino nano or equivalent was written by
Paul Willoughby 03/20/2010
http://www.rickety.us/2010/03/arduino-avr-high-voltage-serial-programmer/
Inspired by Jeff Keyzer http://mightyohm.com
I just slightly modified it, so it can be used for both Attiny’s

You can find the software on my GITHUB

Here is the final version of my fuse reset’er.

Now everything should work, but I always forget Murphys Law.

Now that the Attiny’s have their ID’s, I tried to program them, but no chance. After searching for a solution, I found out, that they are probably configured to be used with an external oscillator.
First, I wanted to add the correct fuse bit, to run them on the internal oscillator, with my just created fuse reset’er, but I had problems with my script, so plan B

I used an Arduino as ISP programmer, and the modified ArduinoISP software, where a clock signal was added to pin9. It’s also on my GITHUB.

A lost a whole weekend with this, but I have learned a lot. Now I can work on my Rf project.

I added an adapter to the fuse resetter. Now I can program the Attiny85 out of the box