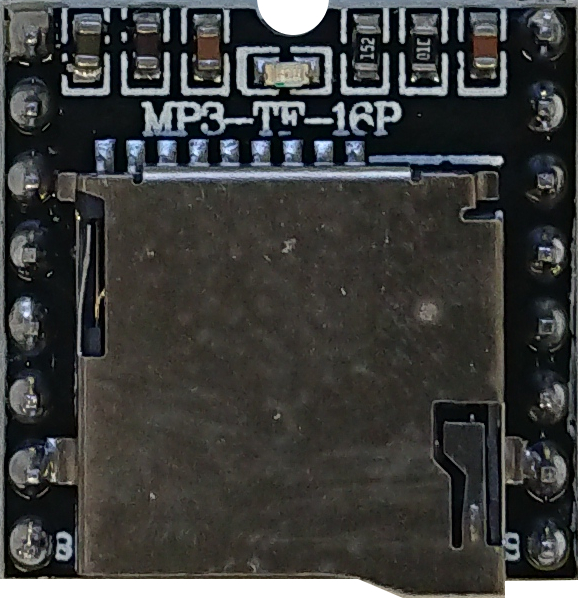 Hi, this little tutorial is to explain how to make the DF Player work to play specific files when called from Arduino. This Small player is a little bit tricky, and the datasheet’s I found on the internet were helpful, but not very clear.

Insert an mirco Sd card with a soundfile in the player and connect a power source. When you make a connection between Gnd and ADKEY_1, the Led on the player should light up. When you have a speaker connected between SPK_+ and SPK_-, you should also hear the sound file.

Now you have to prepare the mirco Sd Card.

If you want play specific voice or sound files, it’s essential to create numbered folders 01 to a max of 99. Inside each folder the files need to be numbered from 001 to 255.

I tryed to make the checksum work, but I failed. So I found out, by simply leaving the checksum away, everything worked fine 🙂

I wrote this little test program to play sound file 01 in folder 01. If this works for you, you can play around with it, to understand how to switch between folders and files.

The command 0x0F is for playing sounds in a folder. If you use 0x03 instead, it will play files from the root of your Sd card, but it will ignore the numbering. For the player the first file is the first uploaded, so you can not address them with there number, if you use 0x03 as command.

to reset the player:

I’m still working on this. If I find new things, I’ll post them here